Engines of War, by George Mann

Posted on September 6, 2014 by starcatbooks 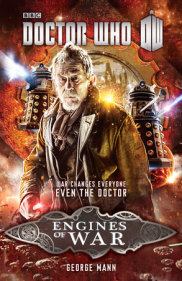 Just finished reading Engines of War, the new Doctor Who novel that’s being released on Sept 9, 2014.

This is apparently going to be the one and only “War Doctor” novel, and while it has some overblown scenes and descriptions that seem to plague all Doctor Who books, overall I thought it was rather good and well worth reading. I could see John Hurt—which tells me the author was doing his job!

Without giving away the plot, let’s just say the companion he picks up at the beginning of the book does a good job of reflecting the Doctor’s own issues and foreshadowings of the oncoming conflict not just with the Daleks in the final days of the Time War, but of his own inner conflicts after the war as both the Ninth and Tenth Doctors. The relationship between them, even though this is very much an action-driven book, is well drawn and deeper than most Doctor Who novels.

A mad Rassilon (who taps the same beat as the Master with his gauntlet—!!), Daleks, Time Lords both crazy and not, and of course a lot of running. What’s not to like?

As far as a Time War novel goes, this does satisfy, though I’m sorry to find out that they apparently aren’t planning to do another one. At least this one is being produced in the US by Broadway Books, so we can order it easily (unlike the BBC ones).

Come on into the bookstore this next week and get your copy!